Some weeks ago I spent four days with the Tenggren holdings at the Kerlan Collection by the University of Minnesota, MN. I was there to do research for my Tenggren biography, which is planned to be released autumn 2014. I had the opportunity to browse through a number of interesting items of Tenggren’s, among these this little folder from the Saturday Evening Post from September 1956, presumably an in-house staff publication. Also in November 1956, the famous Tenggren cover for Saturday Evening Post with Walt Disney on the train was published, illustrating Diane Disney Miller’s article “My dad Walt Disney”. The folder describes the process of the cover from idea to finished painting. 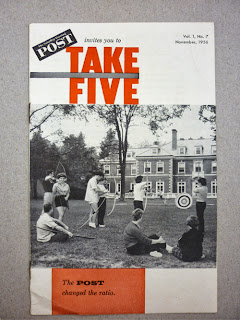 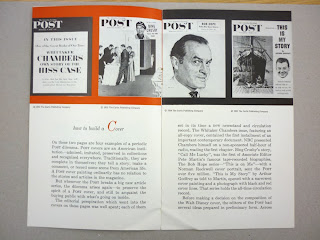 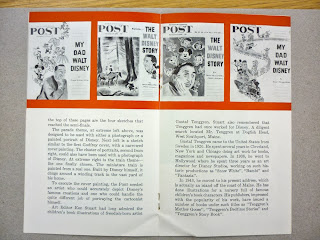 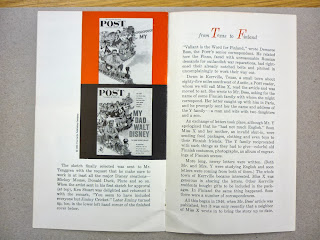 It’s great to see Ken Stuart’s sketches for the various cover ideas, compared with Tenggren’s final well-known artwork. Especially the little addition of Jiminy Cricket is fun to learn about.

Here's some more findings from the Kerlan Collection.
Tenggren's Thumbelina was published by Simon and Schuster in 1953 as the first in a series of Tenggren fairy tales. It features marvelous paintings in the jazzy, decorative style that Tenggren used through the fifties. For those of you already familiar with this Little Golden Book it might be fun to see this alternate cover.
In this first cover proposal we see a girl on top of the swallow but the style is quite different from the final cover. This year Tenggren produced another Little Golden Book, The Topsy Turvy Circus and it looks as if he fetched this girl from that French-inspired story. There is also a great influence from Mary Blair in the rendering. Mary Blair was one of Tenggren's colleagues at the Character Model Department at Disney's Studio and made a great row of Little Golden Books for Simon and Schuster.
Other books in the Tenggren Fairy Tale series were Jack and the Beanstalk in 1953, The Golden Goose in 1954, The giant with the Three Golden Hairs in 1955, and Snow White and Rose Red in 1957. More books in this series was planned: The Goose Girl and The Magic Snuffbox were two of those who never reached the book shelves but remain as sketch dummies in the Kerlan Collection.
Upplagd av Lars Emanuelsson kl. 07:35 Inga kommentarer:

Book project starts up i Minneapolis

Now it's official: the biography on Gustaf Tenggren is scheduled to be published in August 2014. Co-writer/editor will be Oskar Ekman. The first edition will be in Swedish, but hopefully an English edition will follow within shortly. The publisher is Kartago, a company within the Bonnier Group.
The other week we spent four days at the Elmer L Anderson Library at University of Minneapolis, MN. The University has an enormous archive where a whole lot of documents from all over USA is deposited.
The Tenggren Papers are held within The Kerlan Collection, a collection of children's literature related items, such as books, art, letters and manuscript. It's all part of the Children's Literature Research Center, a world-renowned treasure chamber for knowledge on children's literature.
We were very well received by the curator, Lisa von Drasek, who took us on a tour around the gigantic archive premises. During the four days we browsed through 40 - 50 boxes of Tenggren art and photographed hundreds of documents. I selected 67 pieces of art to be scanned, so the book will feature first class reproductions of many of the great LGB illustrations.
The tour from Sweden to USA was well worth the effort: the holdings of the archive is vast. Almost the total production of original artwork produced by Gustaf Tenggren after WWII were donated by Gustaf's widow, Mollie Tenggren when she died in 1984. Along with that a whole lot of other documents can be browsed, like unpublished proposals, sketches, brochures, clippings and such.
Keep an eye on this blog and I'll try to show some of the fantastic stuff we found in this great treasure chest of Tenggreniana.
My previous Gustaf Tenggren News blog will be discontinued and this one will hold the news from now on.
Upplagd av Lars Emanuelsson kl. 05:15 1 kommentar: