On Saturday February 22, 2020, the long-awaited comprehensive exhibition of Gustaf Tenggren's art opened at Millesgården in Stockholm. This museum is built to commemorate the art of Swedish sculptor Carl Milles, but throws at least three great art shows of other artists yearly. This time, Gustaf Tenggren is the subject. The generous loans of art from important American archives like The Walt Disney Family Museum, Kerlan Collection and Weisman Museum in Minneapolis guarantee the quality of this once-in-a-lifetime exhibition. Along with the art lent by Museums and private persons in Sweden, the show stands out as the most ambitious Tenggren exhibition so far. 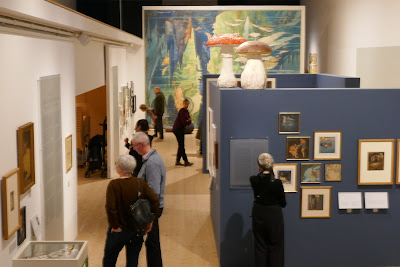 The opening was held in attendance of members of the American Embassy in Stockholm who also are sponsoring the show. Museum Director Onita Wass held the opening speech and curator and Tenggren biographer Lars Emanuelsson followed with some words. The exhibition features legendary Tenggren art from his period as an employee at the Walt disney Studio 1936 - 1939, never before seen in Sweden. Concept paintings for the feature films SnowWhite and the Seven Dwarfs and Pinocchio and Silly Symphony The Old Mill  can be studied closely. 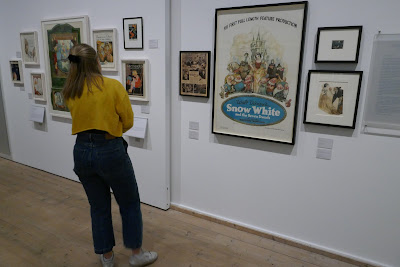 Spectacular illustrations from his years as a famed commercial artist and illustrator during the 1920ies and 1930ies in New York reveals why he was hired by Disney in the first place. Additionally, a great selection of children's book art from his years as a Golden Books artist tops off the exhibition. The show runs from February 22 through May 31 2020, and is a must for anyone who loves Tenggren art and wants to see a representative compilation of his art, spanning his total production. This opportunity may not come back, so hurry to Millesgården in Stockholm to see the show. 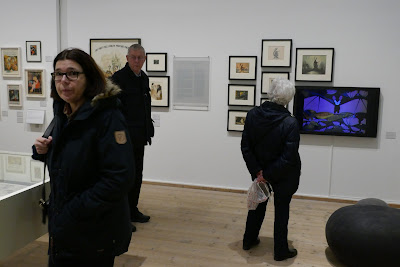 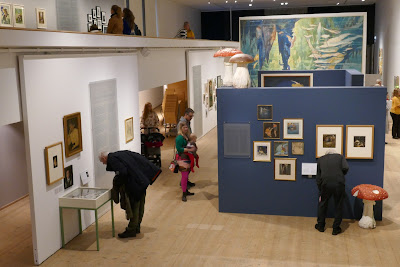 Gustaf Tenggren wishes all Gustafficionados a happy and prosperous 2019! 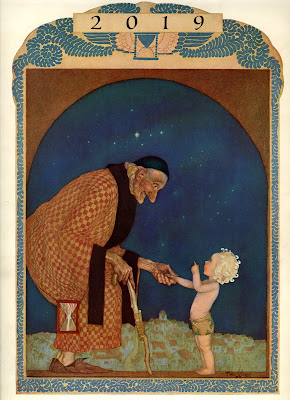 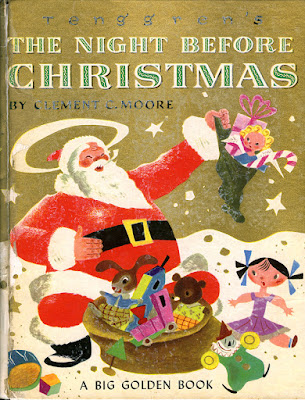 Today I would like to send the best greetings to all Tenggren fans with a couple of stunning spreads. The Night Before Christmas by C. Clement Moore was published in 1951 by Simon & Schuster as a Big Golden Book. 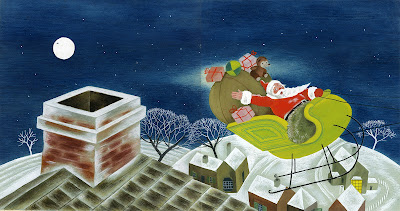 Gustaf Tenggren illustrated this classic in his typical 1950s style, using decorative, stylized planes of bright colors in a syncopated jazzy rhythm. A clear inspiration from his former Disney colleague Mary Blair can be recognized. 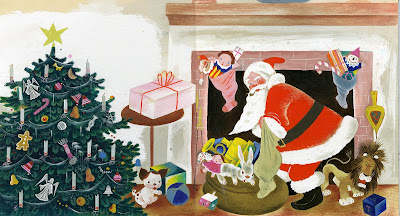 In this spread, with Santa delivering toys, Gustaf has included three of the characters he invented for Little Golden Books. The Poky Little Puppy, The Lively Little Rabbit and The Tawny Scrawny Lion are all featured in the image, although the lion was not introduced until the year after, in 1952. I think this somewhat forgotten Tenggren book is one of his brightest and merriest. With that, i wish all A Merry Christmas and a Happy New Year!
Upplagd av Lars Emanuelsson kl. 08:34 Inga kommentarer:

The year 2020 will be a special year for admirers of Gustaf Tenggren and his art. Apart from being a numerically and visually interesting set of numbers, it marks a couple of anniversaries connected to Gustaf Tenggren's life. In 1920, Gustaf Tenggren arrived in USA from Sweden. In 1970 he died in Maine after a long career. That means that the year 2020 not only marks the centennial anniversary of his arrival in USA but also the 50-year commemoration of his passing.
So what can be more appropriate than to throw a comprehensive exhibition of his work? As it happens, the museum of Swedish sculptor Carl Milles, Millesgården, has decided to do just that. In spring of 2020, a Gustaf Tenggren exhibition will be held at Millesgårdens Konsthall. The scope is to display a total overview of Tenggren's production and I have been asked to curate the show, the task of which I have most gratefully, although in utter humbleness, accepted.

The venue of Millesgården seems quite logical – the similarities of the two artists are many. Carl Milles was born in Sweden and had built a career in Sweden as a prominent sculptor with several commissions before he visited USA in the beginning of the 1930ies. In 1931 he was hired as a professor in sculpture by the Cranbrook Academy. He stayed and worked in USA for 20 years, before he returned to his home at Lidingö, the current premises of Millesgården Museum.

Gustaf Tenggren had also started his career as an illustrator of magazines and fairy tale books when he left Sweden for USA. Just as his fellow countryman he built a solid reputation as an artist and illustrator on American turf, but unlike Milles, he never returned to his paternal homeland.
The homecoming of Tenggren's art to the country where he was forgotten for a vast period will mean a great opportunity to get acquainted to Gustaf Tenggren's art as a whole. The venue for this event could not be better; Milles and Tenggren is a combo hard to beat.
Upplagd av Lars Emanuelsson kl. 11:55 Inga kommentarer:

A night to remember

As mentioned already, on June 22nd Gustaf Tenggren was inducted as a member of Society of Illustrator's Hall of Fame at a Ceremony held in the premises of the club on128 East 63rd Street in New York.
For once, the event reception was held in the exhibition area, which turned out to provide a spectacular environment for the venue, hosting parts of Stephen Korshak's amazing collection of illustration art as it was. Very appropriately, two works by Gustaf Tenggren were included in the show, both of which from his early artist years.

Receiving the award on behalf of Gustaf Tenggren was Barbara Wells Fitzgerald, daughter of Gustaf's younger brother, Gunnar. Her son Christopher and Nhu Tran accompanied her at the reception dinner.
Gustaf Tenggren sure was in good company: the other illustrators awarded in 2017 were:
From the impressive list of awardees, three were present at the reception. Ralph Steadman, who had provided the event logo, could unfortunately not make it but was participating through a video.

Anita Kunz and Bart Forbes both held acceptance speeches to the audience from the stand, while the reception's grand old man, Mort Drucker, preferred to thank for the award more briefly. After all, this gentleman, born in 1929, is in his right to go easy after a 60-year career as a cartoonist.
All in all, this induction ceremony consolidated Gustaf Tenggren's repute as one of the important early New York illustrators during the years when the Society of Illustrator were still in its bud. I'm so happy that his niece Barbara was able to attend the venue, accepting the prize on her uncle Gustaf's behalf. It would have made him proud, entitling himself an artist as he always was throughout his career.
Upplagd av Lars Emanuelsson kl. 09:40 1 kommentar:

And the awardees are...

I am truly proud to announce that Gustaf Tenggren has been chosen to be inducted as a member of The Society of Illustrators' Hall of Fame in New York. Finally he is acknowledged as one of the great illustration artists of USA.
The induction ceremony will take place on June 22nd, 2017, at the premises of the Society of Illustrators in New York City. He is in good company – the other laureates at the event are:

So go for a ticket while you can! https://www.societyillustrators.org/shop/buy-tickets/1121
Upplagd av Lars Emanuelsson kl. 11:25 Inga kommentarer:

In a series of lectures, the archivists and curators of The Archives of University of Minneapolis will talk about exciting holdings from the collections and their originators . First in line on Friday April 7, is "Beyond Golden Books: The Art of Gustaf Tenggren", presented by Caitlin Marineau, the Children’s Literature Research Collections.

Gustaf Tenggren is known and beloved for his illustrations for books such as The Poky Little Puppy, as well as his work on many classic Disney films, but if we dive deeper into his work, we can unearth a treasure chest of art, from unpublished works to out-of-print classics.
Upplagd av Lars Emanuelsson kl. 12:41 1 kommentar: